Some thoughts on defining deployable components and the dependencies between them

Answer to the question "which classes belong in which components?"

These three tend to pull the answer to "which classes belong in which components?" in different directions

Tension diagram (edges of diagram show the cost of abandoning the principle on the opposite vertex): 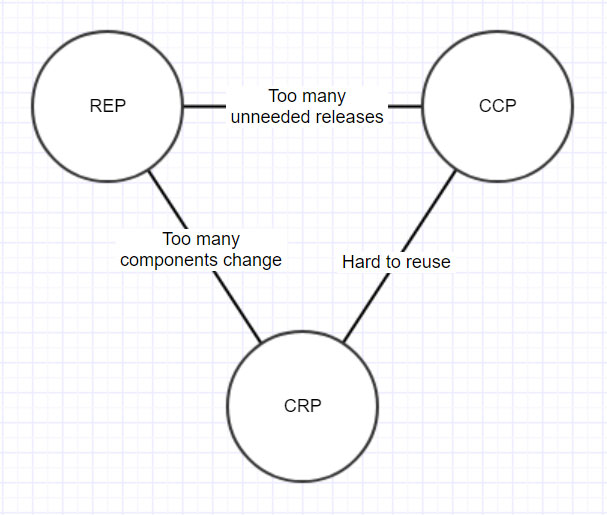 “A good architect finds a position in that tension triangle that meets the current concerns of the development team, but is also aware that those concerns will change over time.” – Robert C. Martin

"When you draw a diagram of your components, using arrows to indicate dependencies, you should not have any cycles in that graph - the graph should be a Directed Acyclic Graph (DAG)"

If the graph is indeed a DAG, it is easy to find out which components could be affected by a change in a certain component: just follow the dependency arrows backwards. Additionally, you can easily find a "topological ordering" for the graph which gives you the order in which to build the components so every component's dependencies are built before the component itself needs to be built.

If you have a cycle, then the components in that cycle are not really independently developable and deployable!

Stability is closely related to the structure of dependencies!

"You should depend on more stable components, not on more volatile ones"

Here, "abstractness" could be defined as the ratio of the number of classes in the component versus the number of those classes that are abstract classes or interfaces. Value = 0 if all concrete, 1 if all abstract.

Component structure doesn't need to reflect the different functional areas of the system! Instead, it reflects the buildability and maintainability of the application.

Likely, top-down design of component structure will not work well!